Decision making why is it so hard sometimes? 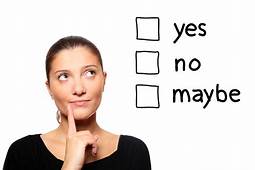 Decision making is the cognitive process leading to the selection of a course of action among alternatives, every decision-making process produces a final choice. It can be an action or an opinion. It begins when we need to do something, but we do not know what, therefore, decision-making is a reasoning process which can be rational or irrational, and can be based on explicit assumptions or tacit assumptions.

Common examples include shopping, deciding what to eat, when to sleep, and deciding whom or what to vote for in an election or referendum.

Structured rational decision making is an important part of all science-based professions, where specialists apply their knowledge in a given area to making informed decisions, for example, medical decision making often involves making a diagnosis and selecting an appropriate treatment.

Some research using naturalistic methods shows, however, that in situations with higher time pressure, higher stakes, or increased ambiguities, experts use intuitive decision making rather than structured approaches, following a recognition primed decision approach to fit a set of indicators into the expert’s experience and immediately arrive at a satisfactory course of action without weighing alternatives.

Due to the large number of considerations involved in many decisions, computer-based decision support systems have been developed to assist decision makers in considering the implications of various courses of thinking, recent research has shown they can help reduce the risk of human errors.

According to behaviouralist, Isabel Briggs Myers (1962), a person’s decision making process depends to a significant degree on their cognitive style. Starting from the work of Carl Jung, Myers developed a set of four bi-polar dimensions, called the Myers-Briggs Type Indicator (MBTI).

The terminal points on these dimensions are:

She claimed that a person’s decision-making style is based largely on how they score on these four dimensions. For example, someone that scored near the thinking, extroversion, sensing, and judgement ends of the dimensions would tend to have a logical, analytical, objective, critical, and empirical decision-making style.

It is generally agreed that biases can creep into our decision-making processes, calling into question the correctness of a decision. It is not generally agreed, however, which normative models are to be used to evaluate what constitutes an erroneous decision, nor is the scientific evidence for all of the biases agreed upon. While it is agreed that decision-making can be biased, how to tell when it is, and specific cases of biases, are often challenged, the issue in general can be quite controversial among scholars in the field.

Below is a list of some of the more commonly debated cognitive biases:

For an explanation of the logical processes behind some of these biases, see logical fallacy.