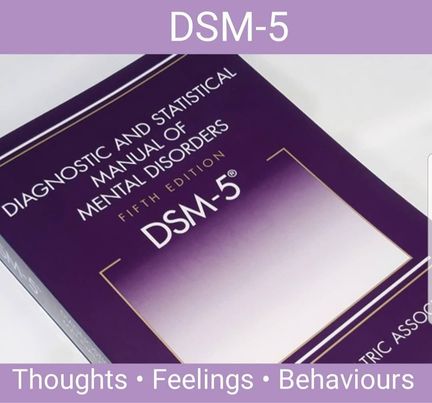 The DSM, is the other main diagnostic manual used around the world, and is the American counterpart of ICD-10. The Diagnostic and Statistical Manual of Mental Disorders (DSM) is published by the American Psychiatric Association and provides clinicians with official definitions of, and criteria for, diagnosing mental disorders.

In DSM-5, Hoarding Disorder sits under its own category of Obsessive-Compulsive and Related Disorders and within that the following subcategories were placed:

In terms of the actual diagnostic criteria the DSM-5 lists the following:

A. Persistent difficulty discarding or parting with possessions, regardless of their actual value.

B.This difficulty is due to a perceived need to save the items and to distress associated with discarding them.

C. The difficulty discarding possessions results in the accumulation of possessions that congest and clutter active living areas and substantially compromises their intended use. If living areas are uncluttered, it is only because of the interventions of third parties (e.g., family members, cleaners, authorities).

D. The hoarding causes clinically significant distress or impairment in social, occupational, or other important areas of functioning (including maintaining a safe environment for self and others).

F. The hoarding is not better explained by the symptoms of another mental disorder (e.g., obsessions in obsessive-compulsive disorder, decreased energy in major depressive disorder, delusions in schizophrenia or another psychotic disorder, cognitive deficits in major neurocognitive disorder, restricted interests in autism spectrum disorder).

The essential feature of hoarding disorder is persistent difficulties discarding or parting with possessions, regardless of their actual value (Criterion A). The term persistent indicates a long-standing difficulty rather than more transient life circumstances that may lead to excessive clutter, such as inheriting property. The difficulty in discarding possessions noted in Criterion A refers to any form of discarding, including throwing away, selling, giving away, or recycling. The main reasons given for these difficulties are the perceived utility or aesthetic value of the items or strong sentimental attachment to the possessions. Some individuals feel responsible for the fate of their possessions and often go to great lengths to avoid being wasteful. Fears of losing important information are also common. The most commonly saved items are newspapers, magazines, old clothing, bags, books, mail, and paperwork, but virtually any item can be saved. The nature of items is not limited to possessions that most other people would define as useless or of limited value. Many individuals collect and save large numbers of valuable things as well, which are often found in piles mixed with other less valuable items.

Individuals accumulate large numbers of items that fill up and clutter active living areas to the extent that their intended use is no longer possible (Criterion C). For example, the individual may not be able to cook in the kitchen, sleep in his or her bed, or sit in a chair. If the space can be used, it is only with great difficulty. Clutter is defined as a large group of usually unrelated or marginally related objects piled together in a disorganised fashion in spaces designed for other purposes (e.g., tabletops, floor, hallway). Criterion C emphasises the “active” living areas of the home, rather than more peripheral areas, such as garages, attics, or basements, that are sometimes cluttered in homes of individuals without hoarding disorder. However, individuals with hoarding disorder often have possessions that spill beyond the active living areas and can occupy and impair the use of other spaces, such as vehicles, yards, the workplace, and friends’ and relatives’ houses. In some cases, living areas may be uncluttered because of the intervention of third parties (e.g., family members, cleaners, local authorities). Individuals who have been forced to clear their homes still have a symptom picture that meets criteria for hoarding disorder because the lack of clutter is due to a third-party intervention. Hoarding disorder contrasts with normative collecting behaviour, which is organised and systematic, even if in some cases the actual amount of possessions may be similar to the amount accumulated by an individual with hoarding disorder. Normative collecting does not produce the clutter, distress or impairment typical of hoarding disorder.

Symptoms (i.e., difficulties discarding and/or clutter) must cause clinically significant distress or impairment in social, occupational, or other important areas of functioning, including maintaining a safe environment for self and others (Criterion D), In some cases particularly when there is poor insight, the individual may not report distress, and the impairment may be apparent only to those around the individual. However, any attempts to discard or clear the possessions by third parties result in high levels of distress

Other common features of hoarding disorder include indecisiveness, perfectionism, avoidance, procrastination, difficulty planning and organising tasks, and distractibility. Some individuals with hoarding disorder live in unsanitary conditions that may be a logical consequence of severely cluttered spaces and/or that are related to planning and organising difficulties. Animal hoarding can be defined as the accumulation of a large number of animals and a failure to provide minimal standards of nutrition, sanitation, and veterinary care and to act on the deteriorating condition of the animals (including disease, starvation, or death) and the environment (e.g., severe overcrowding, extremely unsanitary conditions). Animal hoarding may be a special manifestation of hoarding disorder. Most individuals who hoard animals also hoard inanimate objects. The most prominent differences between animal and object hoarding are the extent of unsanitary conditions and the poorer insight in animal hoarding.

Nationally representative prevalence studies of hoarding disorder are not available. Community surveys estimate the point prevalence of clinically significant hoarding in the United States and Europe to be approximately 2%—6%. Hoarding disorder affects both males and females, but some epidemiological studies have reported a significantly greater prevalence among males. This contrasts with clinical samples, which are predominantly female. Hoarding symptoms appear to be almost three times more prevalent in older adults (ages 55—94 years) compared with younger adults (ages 34—44 years).

Hoarding appears to begin early in life and spans well into the late stages. Hoarding symptoms may first emerge around ages 11—15 years, start interfering with the individual’s everyday functioning by the mid-20s, and cause clinically significant impairment by the mid-30s. Participants in clinical research studies are usually in their 50s. Thus, the severity of hoarding increases with each decade of life. Once symptoms begin, the course of hoarding is often chronic, with few individuals reporting a waxing and waning course.

Pathological hoarding in children appears to be easily distinguished from developmentally adaptive saving and collecting behaviours. Because children and adolescents typically do not control their living environment and discarding behaviours, the possible intervention of third parties (e.g., parents keeping the spaces usable and thus reducing interference) should be considered when making the diagnosis.

Indecisiveness is a prominent feature of individuals with hoarding disorder and their first-degree relatives.

Individuals with hoarding disorder often retrospectively report stressful and traumatic life events preceding the onset of the disorder or causing an exacerbation.

Hoarding behaviour is familial, with about 50% of individuals who hoard reporting having a relative who also hoards. Twin studies indicate that approximately 500/0 of the variability in hoarding behaviour is attributable to additive genetic factors.

While most of the research has been done in Western, industrialised countries and urban communities, the available data from non-Western and developing countries suggest that hoarding is a universal phenomenon with consistent clinical features.

Clutter impairs basic activities, such as moving through the house, cooking, cleaning, personal hygiene, and even sleeping. Appliances may be broken, and utilities such as water and electricity may be disconnected, as access for repair work may be difficult. Quality of life is often considerably impaired. In severe cases, hoarding can put individuals at risk for fire, falling (especially elderly individuals), poor sanitation, and other health risks. Hoarding disorder is associated with occupational impairment, poor physical health, and high social service utilisation. Family relationships are frequently under great strain. Conflict with neighbours and local authorities is common, and a substantial proportion of individuals with severe hoarding disorder have been involved in legal eviction proceedings, and some have a history of eviction.

Obsessive-compulsive disorder. Hoarding disorder is not diagnosed if the symptoms are judged to be a direct consequence of typical obsessions or compulsions, such as fears of contamination, harm, or feelings of incompleteness in obsessive-compulsive disorder (OCD). Feelings of incompleteness (e.g., losing one’s identity, or having to document and preserve all life experiences) are the most frequent OCD symptoms associated with this form of hoarding. The accumulation of objects can also be the result of persistently avoiding onerous rituals (e.g., not discarding objects in order to avoid endless washing or checking rituals).

In OCD, the behaviour is generally unwanted and highly distressing, and the individual experiences no pleasure or reward from it. Excessive acquisition is usually not present; if excessive acquisition is present, items are acquired because of a specific obsession (e.g., the need to buy items that have been accidentally touched in order to avoid contaminating other people), not because of a genuine desire to possess the items. Individuals who hoard in the context of OCD are also more likely to accumulate bizarre items, such as trash, faeces, urine, nails, hair,
used diapers, or rotten food. Accumulation of such items is very unusual in hoarding disorder.

When severe hoarding appears concurrently with other typical symptoms of OCD but is judged to be independent from these symptoms, both hoarding disorder and OCD may be diagnosed.

We use cookies on our website to give you the most relevant experience by remembering your preferences and repeat visits. By clicking “Accept”, you consent to the use of ALL the cookies.
Cookie settingsACCEPT
Manage consent

This website uses cookies to improve your experience while you navigate through the website. Out of these, the cookies that are categorized as necessary are stored on your browser as they are essential for the working of basic functionalities of the website. We also use third-party cookies that help us analyze and understand how you use this website. These cookies will be stored in your browser only with your consent. You also have the option to opt-out of these cookies. But opting out of some of these cookies may affect your browsing experience.
Necessary Always Enabled
Necessary cookies are absolutely essential for the website to function properly. These cookies ensure basic functionalities and security features of the website, anonymously.
Functional
Functional cookies help to perform certain functionalities like sharing the content of the website on social media platforms, collect feedbacks, and other third-party features.
Performance
Performance cookies are used to understand and analyze the key performance indexes of the website which helps in delivering a better user experience for the visitors.
Analytics
Analytical cookies are used to understand how visitors interact with the website. These cookies help provide information on metrics the number of visitors, bounce rate, traffic source, etc.
Advertisement
Advertisement cookies are used to provide visitors with relevant ads and marketing campaigns. These cookies track visitors across websites and collect information to provide customized ads.
Others
Other uncategorized cookies are those that are being analyzed and have not been classified into a category as yet.
SAVE & ACCEPT